Bottom of the Deck 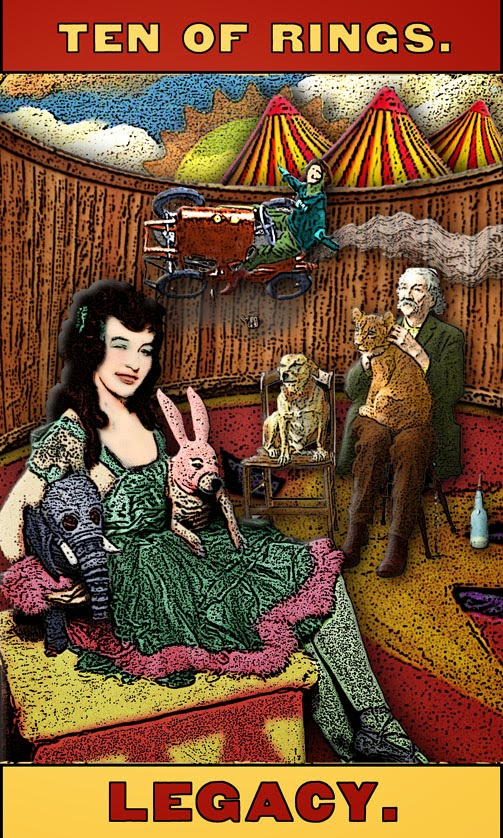 I'm still not entirely happy with this one. After literally hours playing around with the colors, the colors still bug me... although it's better than it was when I first "put it down."

Most often, the card has ten pentacles superimposed over a multi-generational family scene, It took me years and years to realize this, but the pentacles are normally arranged in a pattern that reflects the Kabbalah Tree of Life. I 've done some reading on the Tree of Life, and I have to say that even now my understanding of it is pretty vague. I get the principle, but all the Hebrew names and all the details of what they represent are kind of lost on me. I know this is something I've got to work on.

For my version... there really are ten rings in the picture, and instead of (or in addition to) sort of representing the Tree, I wanted to put the viewer inside the tenth ring. Inside that ring there are also two generations of Circus family: while Grandfather one tamed lions, and still nurtures a baby, daughter has adopted dogs instead... and dresses them up as more exotic animals. I'm not sure why, unless it is a symbol of faithfulness, but dogs have always factored into this card since Waite-Smith's version. Who am I to distance myself from that legacy?

NEXT UP: The Three of Wands.