Nothing Heartbreaking About This Revision 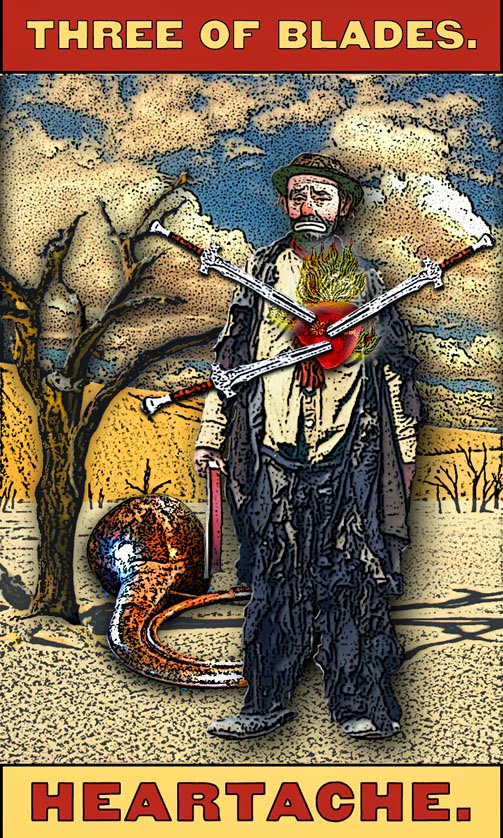 Revisions are going to happen more or less all through the whole deck as I prepare the final files for the printer... and this is one I've been wanting to get to for a while now. I could hardly stand to look at the first version (still viewable elsewhere on this site). It was one of the first Minors that I designed, and I was still feeling out the style that I was looking for, still had some learning ahead of me. The further I got into the deck, the more this one looked like a lost dog.

Basically the only elements that I didn't change even a little bit are.... ehm, nothing. Everything changed at least a little bit. I wanted the desert more arid, I wanted the broken tuba to stand out more, the figure was too heavy-handed in how it was "artified" and needed to be completely replaced... this new one is actually carved together from two photos of Emmet Kelly, the great tramp clown of the mid-twentieth century.

More than anything, I damn sure wanted to change the sky and the clouds rolling by in the background, so that it would a) match later card designs and b) not look like crap.

By the way (you knew this was coming, didn't you?) -- this card is exactly how I will feel if the deck doesn't get published. And it won't unless ... well, you know...

We were going great guns and topped the 5k mark the other day, and then in the last two days... whoosh! It dried up just like the desert up there. So -- if you will feel like our disappointed clown up there if the deck isn't published, there's a good way to avoid that!

I'll be updating the Kickstarter project later in the day with Newsy Notes, some questions inserted, and a little background info about the printers. See you there!