Without Any Limit: The Two of Pentacles 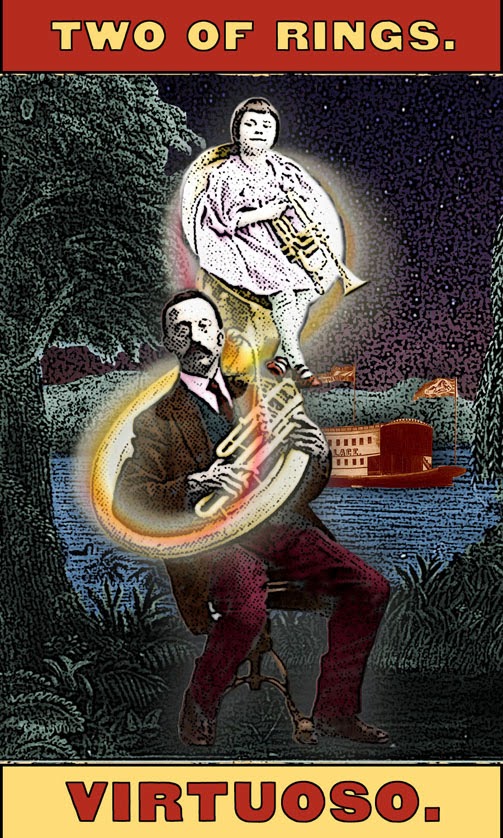 Beyond that, I think that I nailed the colors (always the diciest part of any design), and constructed a happy surrounding environment for my horn-playing duo; and I'm pleased with how well the cosmic lemniscate worked into the design. This symbol that signifies eternity and boundless ability usually floats above the heads of those who possess that magical quality: on the two of pentacles it is woven almost subliminally into the body and activity of the central figure. Pamela Colman Smith drew it as connecting two juggler's balls, a circusy enough image but not one that I wanted to slavishly duplicate; in other decks I have seen it woven into the wheels of a bicycle, among other things.

One thing that my tuba player has in common with the juggler on Pamela Colman Smith's two of pentacles: they both look as though they could go on doing tis forever, and that's a big part of this card's meaning.

The querent who draws this card typically has several things going on at once in their lives; but with patience and skill they are able to balance these things and even take some joy from the act. Hence my keyword, which I don't think has ever been applied to this card before. However, the card also indicates a need for continued focus: because one wrong move could change the situation from one of harmony and balance into one of calamity.

On the river behind our two-person band floats that great Floating Palace: this was nothing less than a functioning circus on an enclosed barge that traversed the Mississippi during the mid-eighteen-hundreds. Today the waters of that great river are smooth, but they were not always so. The traditional version of the card shows a boat flung about on artfully churning waves, indicating the changeableness of the situation or possibly rough waters ahead. But c'mon: The Floating Palace was an entire circus on a boat... how prone to change and difficulty is that?