Feeling Hemmed In By Life? 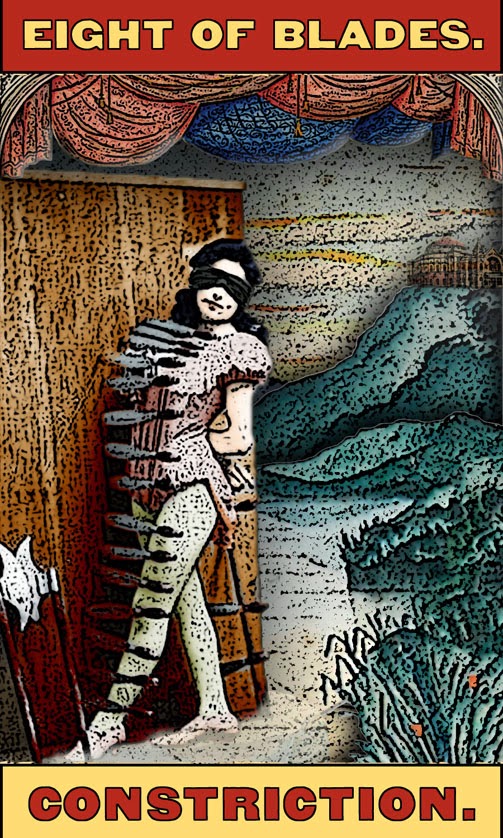 Yes, I know that there are more than eight knives pinning our lady down, so to speak, in her rut. But, in the words of Monty Python, if you're going to be a stickler for detail, I'm going to piss off.

This one is pure Waite-Smith symbolism, Ladies and Gentlemen. I had to add the blindfold (and give her hair a bit of a trimming in the process), but other than that, the central image was just made for this card. What other card would it be?

The background uses multiple images by the same artist... an anonymous stage designer (or so we figured) of the early 20th century. In one of her voyages of discovery, my mother picked up an amazing collection of miniature set designs created by a talented but unknown person. She had some of them framed in black; but she also had a miniature theater built in wood with a drawer in the bottom, so that many of the scenes could be changed and displayed at will. This was one of the objects that was badly botched by the auctioneer after her death. I tried to convey to him the history of the pieces and the fact that they were all a set, but it went in one ear and out the other, and in the auction the set was broken up forever. These pieces are from the catalog; I did manage to hang onto two pieces that had been framed in a double-sided arrangement together.

The castle on the hill is actually a circus dome. Long before circuses hit the road, they played in large stone and wood structures that were built specifically to house them. This is one of those early buildings.