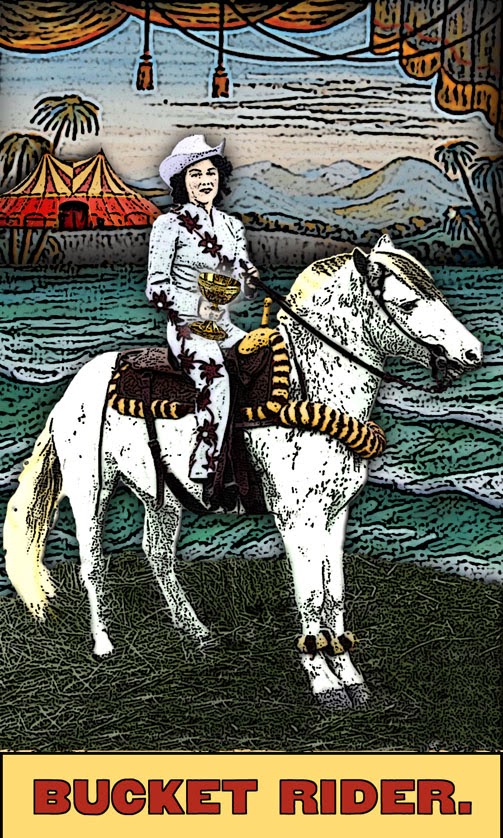 The Court cards are, for me, the most difficult cards to read in the entire tarot deck. They represent "a person" -- except when they don't. They represent the querent -- except when they don't. Meanings or definitions of the cards vary across every single tarot book or Little White Book that I've seen. In the end, the only reliable or consistent mode of reading them boils down to associating them with their elements. Knights are associated with fire. Cups are associated with water. Therefore, the Knight of Cups is the "Fire in Water" and possesses the positive characteristics of both. Water is the element of feelings, fire is the element of creativity. Therefore, the Knight of Cups (hereafter known as the Bucket Rider) possesses a unique combination of emotion and invention. This can apply to a person, to the querent, or just to a phase of the moon that the querent is entering into.

Cups in my Circus Tarot are buckets, as I've noted on earlier posts. Knights are going to be referred to in circus terms as "Riders." I thought it too pedantic and nonsensical to label them as "Rider of Buckets" (or Rings, or Blades, or Batons) and so simplified it to what you see above.

I'm going out on a limb with this one, in terms of gender: Knights are depicted as males 99.9 percent of the time in Tarot. But in my experience, one does not have to be male to possess all the characteristics of a knight -- and in the circus, all of the best trick riders are women. I actually hope that this causes a controversy. Nothing equals publicity like a good controversy. And in Tarot of the Zirkus Magi, it's likely that ALL of the knights will be women. It balances the court card genders far more equitably, and makes a lot of sense to me as a writer and as a man. The most "heroic" people that I know (heroism being a defining Knight quality) are all women.

I feel now (with a few designs on tap that you have not yet seen here) that I have progressed beyond the "beginning" stage, and am now well into designing the Minors. There's an awful lot left ahead of me, and some of it will be tough going, but I'm committed now.

Or perhaps maybe I should just BE committed....