Aces Up -- and a Parting of Company 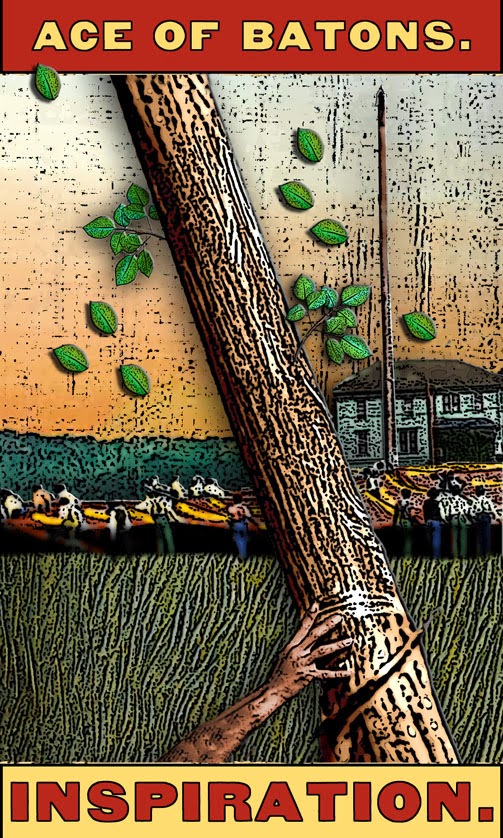 Circus roustabouts raising the Big Top in a new town on a new morning... that's the idea behind my Ace of Wands. All I can do is run it up the tent-pole and hope that the message comes through.

As I rifle through various decks, and especially Rider/Waite/Smith, I begin to see that the only way I'll be able to craft a complete deck is by parting company with some of the traditional symbolism; that I'll have to find a new way to express some of the card meanings. Why? There just isn't an exact equivalent for the Waite-Smith metaphors in the milieu of the circus.

What brings this on? Last night I designed a Four of Cups for the deck. In almost every way, it conformed to the image created by Pamela Colman Smith for her famous tarot. It was a copy of her symbolism using figures from theme-appropriate sources; and I hate it, hate it, HATE it. Shortly before hopping online to post this card, I opened the psd file for that four of cups and stripped everything out of it. I need to start fresh.

I can certainly take various circus people and force them to pedantically act out the same scenes that Ms. Smith drew... and what I'd end up with would just be RWS in Circus Drag. That's not what I want. I've parted company with RWS several times already: I need to give myself permission to do it more often. The card meanings won't change, but the way they are expressed absolutely does need to change. I learned that beyond any doubt last night.

I'm thinking that some of these cards may not even have pictures of swords, wands, pentacles or cups on them. The meaning needs to be in the image, not the object.

Wish me luck -- the Majors were Dead Easy compared to some of what I have ahead of me now.