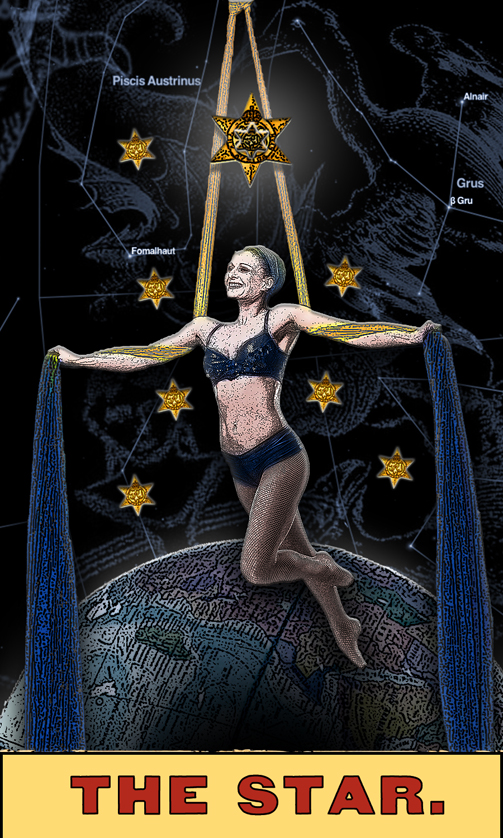 This was one of my more problematic designs so far.... and yet the final version isn't terribly different from the original conception. Cutting it down from two figures to one was part of the key. Another part was making the connection from the draperies supporting the aerialist to the two steams of water typically being poured from vessels in Gaia's hands. If the water represents the unconscious mind, the cloth here represents energy flowing from the heavens and taking on the form of water. Here, this energy is shown enriching the whole planet rather than a specific landscape. Carrie Paris suggested that this is an image that evokes card No. 21, The World, and she's right -- but I have other plans for The World!!

The thing that really nailed down this design for me was finding a constellation that resembles the Ibis that sits in a tree of life visible over Gaia's right shoulder in the Waite-Smith version of the card. There it is, just over my aerialist's right shoulder! With that element, I felt that I had all the important aspects of The Star intact: the dual streams of life-water nourishing a verdant planet, the sense of connection to the earth combined with weightlessness in the main figure, the central star (representing "the radiance of cosmic consciousness" and the seven surrounding stars representing "the seven chakras in our bodies" and the Ibis, "an aspect of Thoth... keeper of magic and mysteries of the universe"-- all three quotes from Farrar & Bone's The Concise Tarot Reader,