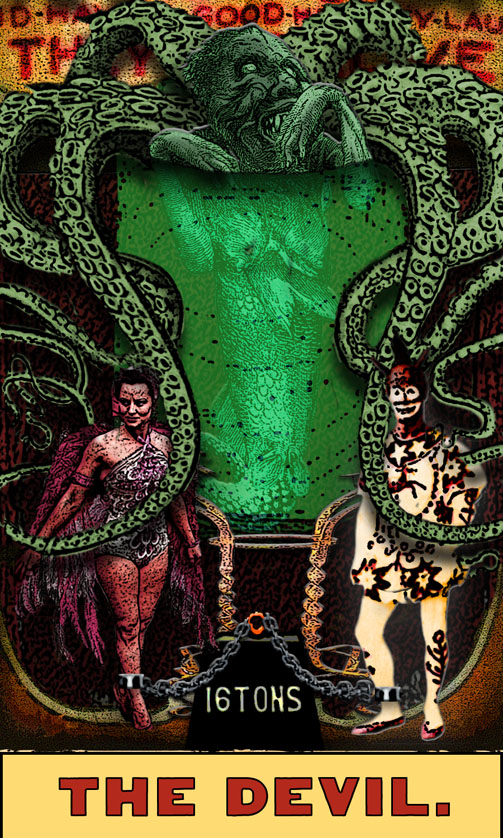 There's a lot that I can't tell you about this design, as THE DEVIL is one of just a handful of cards that features specific characters or events from the novel, SEE THEM DANCE, that compliments the Tarot of the Zircus Magi. This one actually reveals an awful lot -- maybe too much -- of the plot.

That said, I did try to make it as Waite-Smithish as possible, with some different symbolism. Gone is the pentagram over the Devil's head, as my Devil is about as far away from the Devil of the old religions as you cab get. Still, he's devilish enough: that's The Feejee Mermaid floating in the green tank, with the augmentation of some grasping, controlling tentacles.

The Feejee Mermaid has an interesting history that's well worth looking up if you get a chance. It was one of P.T. Barnum's uglier hoaxes, the mummified carcass of a monkey sewn onto the tail of a flounder. It's doubtful that the exhibit actually fooled anyone: still, people came from far and wide to see it in its display case at Barnum's American Museum, which was his principal business -- long before he got into the circus racket.

Although I felt that the tentacles did an adequate job of replacing the chains of control and addiction in the traditional card, the fun idea of using a Monty Pythonish sixteen-ton weight appealed to me enough that I tossed that in as well. My circus performers both have their dervish aspects, although neither have tails.

This was a card that I knew what I wanted to do with for quite a long while before I actually began it, so the design process was pretty straightforward and it came together quite quickly without too much in the way of trial and error or experimentation. Hope that you like it!

Next up: THE QUEEN OF CUPS.