The High Priestess: My Lady in the Dark 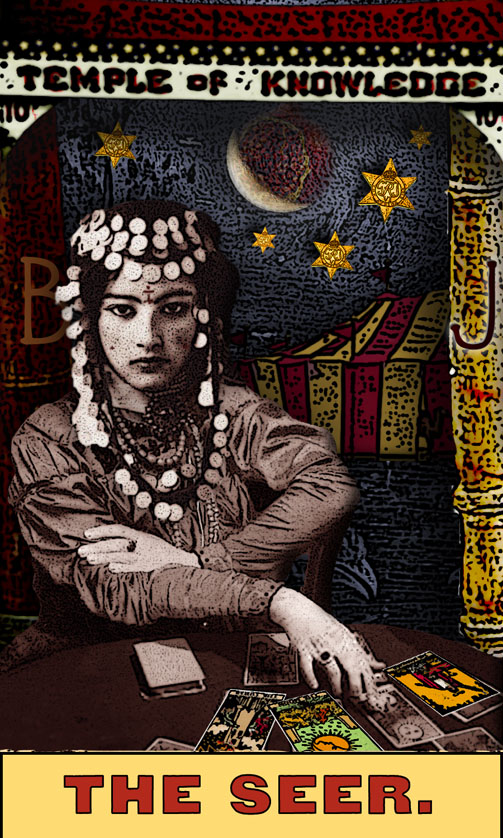 "The High Priestess" is not always my favorite card in any given deck, but she is authoritatively my favorite person in all of the Tarot. She is Muse, she is Spirit Guide, she is Gateway to the Unconscious and Keeper of the Mysteries. I suppose that she is the woman I've been looking for all my life. Whether or not that's true, she is certainly the same woman -- I named her Margaret Darwin -- who is the pivotal character and central figure of my novel, Persephone's Torch.

As far as I'm concerned, Pamela Coleman Smith is the most influential and elegant of all Tarot illustrators; but I have never been drawn so very much to her iteration of The High Priestess. She is almost too transcendent -- too far removed from human emotion and feeling. My ideal High Priestess should be an exotic and almost overpoweringly seductive figure -- but ultimately unapproachable and unobtainable.

Like it or loathe it, Barbara Moore's Steampunk Tarot got the High Priestess spectacularly right. The Rosetta Tarot and Victorian Gothic Tarot also have memorable High Priestesses. Where Tarot designers usually err with this card, they do so by making her too remote, almost Un-human, rather above it all. For me, The High Priestess is a passionate woman, capable of smiling although we do not see her smile,  whose intimate connection with the Great Mysteries renders her aloof from the mundane.

I knew that I had to get her right.

My High Priestess forms the backbone of this entire deck-in-progress. When I discovered her face, I just knew in my bones that she was absolutely right for me. But she had no body, and finding the right one ultimately proved to be as difficult as finding her face. In the end, the solution that presented itself made for an outrageous combination of women: and yet I felt it in my bones that it was Just Absolutely Right.

And so I grafted one woman's head to another woman's body. Can you recognize whose body I selected? The clue is in the cards.

Once the Priestess herself had been found, her temple came together by trial and error in one long six-hour session of working without relief or breaks of any kind. I simply could not break myself away. The Pomegranate moon was, hands down, the most difficult element to get right. Usually the best solution when you hit a block like that is to just stop, stand away from the design, back-brain it for a while. But I could not stop. The High Priestess would not let me.

The last thing that I did, almost as an afterthought, was to tip in the color cards on her reading table. This simple little thing (although not so simple to get the cards into perspective) seemed to just snap the whole image into focus.

It was nearing 4:00 AM when I finished and I was Used Up. So intensely focussed on the work had I been that I was completely worthless the next day; temporarily burned out. The High Priestess demands absolute devotion, and her card was created with very little conscious thought -- all instinct and feeling, trial and error, dipping as much as possible into the Black Water of the unconscious. She came together almost as if she had designed herself.

Next Up: THE MOON.