Reaching for The Moon 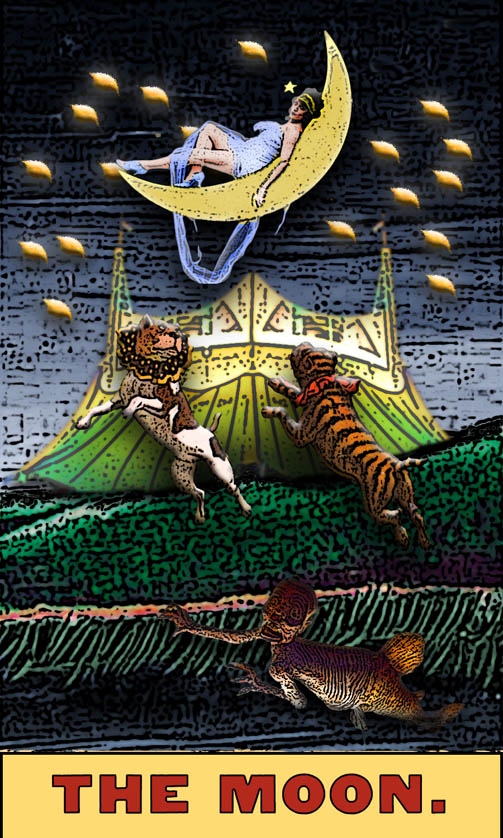 "It's like flying without wings
Playing fiddle without strings
And a million other things
No one can do....
Though my hopes are slender
In my secret heart I pray that you'll surrender soon
Oh, it's like reaching for the moon."

There are lots worse ways to open than with one of Billie Holliday's most exquisite recordings, yes?

This was another card that was harder to nail down than I imagined going in. I had what I thought was the perfect piece of art on hand, derived from a vintage poster advertising the Theatre des Robert-Houdin during the years that it was owned and operated by George Melies, the father of movie fantasy and magic. But when I'd "completed" the first version of the card, that artwork just did not work as well as I'd imagined. The card was too illustrative: it didn't "play well" with the other designs, as all of the other cards had photographic elements for a centerpiece. The dogs and the twin-peaked tent worked more or less perfectly (although as usual they required a lot of fiddly finessing before they looked "right" to me)... so it became obvious that the moon figure would have to go.

But by then I was actually married to the concept of an etherial lady reclining in a crescent moon. Finding her was another matter.

I have access to lots of old "paper moon" photographs, including a nifty one featuring someone's much-loved pooch, but finding the right one of a lady draped in diaphanous veils was harder than you might think. In the end, it was Melies who again came to the rescue with a still from one of his famous celestial movies. Once I'd hand-tinted the photo and rearranged the yods to fit around it, finally the design was set.

Barnum's Feejee Mermaid makes his/her second appearance in the deck, sitting in for the usual Crabster. I hate crabs and lobsters; I don't eat them, I don't like looking at them and I was damned if I was going to have one of those things in my deck! If the Crabster typically represents the darker reaches of the subconscious issuing from the depths to bathe in moonlight, the Feejee Mermaid, being a complete hoax, one of Barnum's uglier humbugs, worked just as well here, if not better given the overall theme of the cards. Here it appears via an actual photo of the creature, though heavily "artified" and tweaked as usual. To make it appear as if it is emerging from water, the lower half was put on a separate layer and then blurred and shadowed.

The dogs are from a vintage circus poster, the tent is an actual tent that has been heavily altered and cartoonified, and once again the background is a detail from a folk art "carved painting" that came from my mother's collection -- again, highly processed to suit the particular look that I've set for this deck.

As always, I welcome any and all thoughts, comments and feedback: duckmeister@ducksoup.me .

Next up: THE EMPEROR.