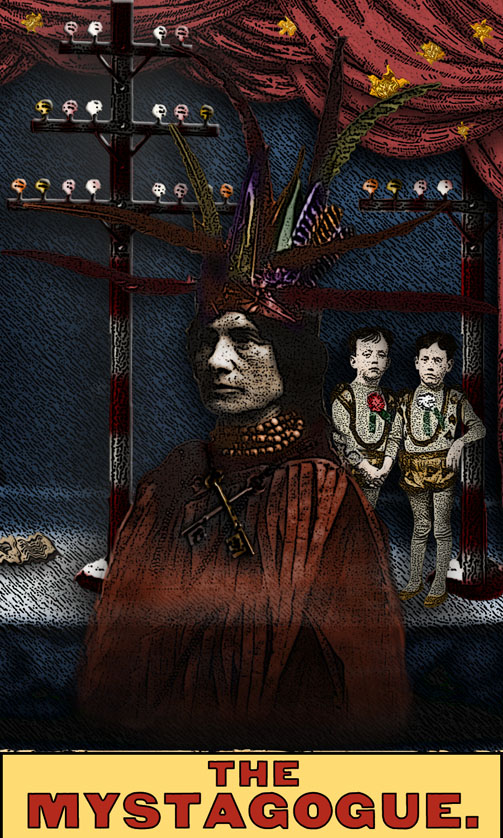 Our originally scheduled Tarot Person for this post, The Empress, is in the garage for refinement. Fortunately, The Hierophant is mostly ready to take her place.

As Carrie Paris pointed out to me, this may be a Tarot First: because our Mystagogue is actually a woman in Native American drag. And she's not just any woman, either: she is Miss Annie Oakley, the legendary sharpshooter who came to fame as a featured performer in Buffalo Bill's Wild West Show.

Once upon a time, Miss Oakley went to a costume ball dressed as "Sitting Bull Jr." -- and this photo was the result of her winning first prize for best costume. Whether as Annie Oakley or as Sitting Bull -- who also did his time with Buffalo Bill's circus outfit, this Hierophant is well-steeped in the legendry of the American West and Circus History, which more than gives her the gravitas needed to hold down this position in the deck.

The keys and a very small pair of circus aerialists standing in for acolytes, each with their proper colors of flower, round out the traditional elements for this card. Instead of a three-crossed staff, the colorful circus ring lighting takes on the role of representing the three realms of existence. Everything here has been hand-colored in an old-fashioned way to make it pop, as well as heavily processed in my usual way. Making her lower half transparent was almost a necessity in order to cover up the extensions I had to make to the original portrait, and I think it adds to her overall flavour of mysticism. I hope you like my Hierophant. She's about the only priestly figure that I would kneel down to.

Next Up: It's another biggie: THE MAGICIAN.