The Fool on The Hill 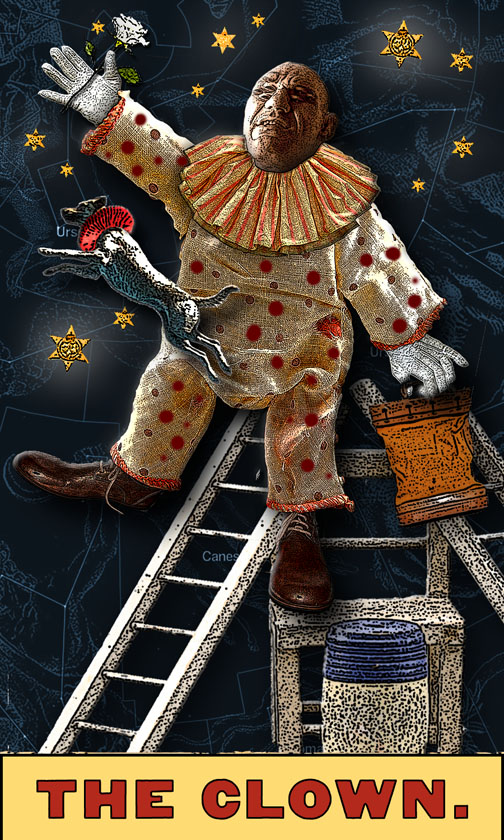 Here we have one of the very few cards in my deck that represents an actual character from the novel. In this case, The Fool is Cranch the Clown, the Top Dog in his trade on the whole planet Oakley, where all the world is literally a circus. Cranch has an unusual build for one of his profession, being eight feet tall, six feet wide, and weighing more than a thousand pounds (most of it muscle: clowning is not a sedentary lifestyle choice). And yes, as you can see if you look closely, he has six eyes. Useful for a Fool with a long, hard journey ahead of him, as both my character and the traditional Fool of the Tarot have in common.

Because I was making a radical choice for the figure (including a body taken from a Schoenhut Circus figure from my mother's vast toy collection), I tried to incorporate as many traditional elements from the Fool card as I could. Instead of a mountain to drop off the edge of, my fool has an arrangement of chairs and ladders to take a pratfall from. Instead of a red feather in his gap, he has red spots on his costume. His dog seems to have wholly given in to the exuberance of the circus. Instead of a hobo's baf on a stick, I wanted to give him what's known in the Circus trade as a Grouch Bag, but could not find any way to make it work. So I gave him a nice durable antique leather bag instead.

Today I am about to head off on my own brief Fool's Journey! Wish me lock and a safe return so that I can get back to work on what matters to me: this deck, among other things.

Next up: THE EMPRESS.