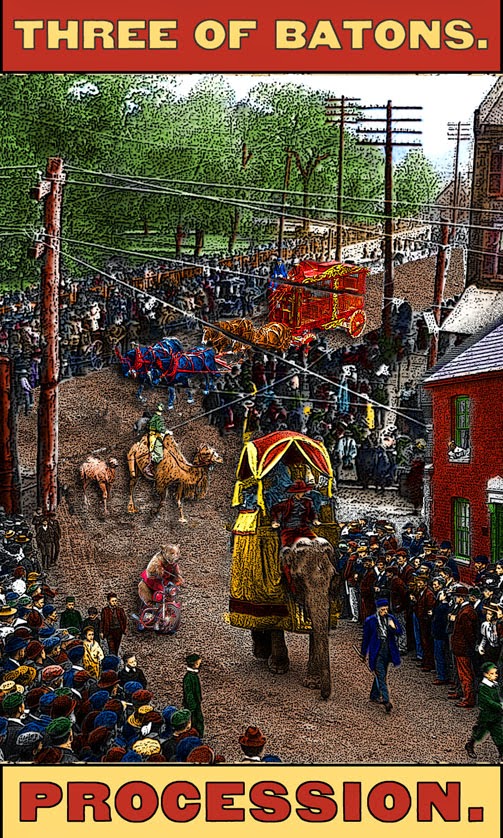 Thanks to all 182 of you who pre-ordered a deck, or supported its publication at other levels. I'm not a person who really knows what to do or say when a project of mine is successful, because ... this deck (and the majors deck before it) is the first one that's met with any success. It's a humbling experience when people actually show this kind of confidence in you, and one that makes me want to get to work ASAP.

Some of you didn't just support the project -- you went out of your way to talk it up and bring others on board. I'm grateful to all of you. I don't think the project would have succeeded without your efforts. Period. Special mention is due to two groups of people: in the first, Christiana Gaudet, who took the time and effort to interview me on her show Christiana's Psychic Cafe; Melodie Liveperson who featured my designs in a big way on her Ask the Astrologers website, and Marcus Katz who brought the full resources of his Tarospohy Tarot Association to bear on spreading the word and encouraging interest in the deck. They're even going to host a special online session they're calling the Secret Circus, featuring this deck. I'm not used to people actually believing in me or my work, and all of this has been kind of overwhelming.

The second group is made up of people that I cam't all put names to. These are the people who have been with me right from the beginning, who made the Majors deck possible, and who have not just used the deck but taken it with them out into the tarot community, used it publicly, and promoted it quietly, so to speak, from within. I could name at least a handful of you, but that wouldn't be fair to the ones I can't name, so -- the fairest thing is just to say, "You know who you are." Thank you!

Finally, the one person we all need to thank is Carrie Paris. Without her kind advice, input, commentary, and unfailing support, from its inception on through its production and promotion, this deck would quite literally not exist. Visit her at www.carrieparis.com.

You can still visit the Kickstarter page and read more detailed updates about the deck's production there.