An Exercise in Disappointment 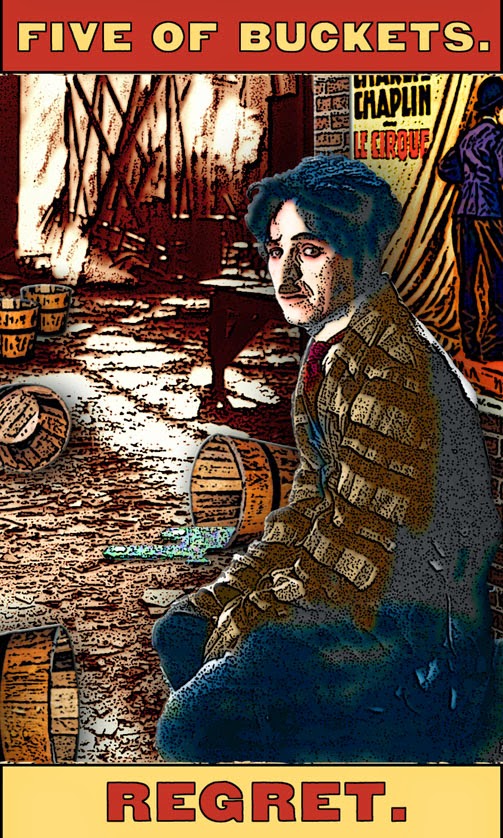 In 1926, Chaplin's life was falling apart. The IRS was after him for back taxes, his mother died, and in December his wife Lita Grey filed for what would become a rancorous divorce. In September, production of his next feature film, The Circus, was brought to a standstill by a studio fire that destroyed almost everything.

For reasons that only Chaplin could probably fully understand, he had himself photographed on the ruined set, in full tramp make-up, literally on his knees in the rubble of his life. This is the photo I've used here.

It makes for an expressive card; but in several ways I am not entirely happy with this design. Just for starters, I'd already used Buster Keation on the card that falls immediately before this one, the four of cups. Two silent-film comedians in that close a proximity runs the risk of turning the deck into a Tarot of Silent Film Stars (an idea I have tabled for later) instead of a Circus tarot... and yet, Chaplin was in the process of making his Circus movie when this happened. The reason I finally opted for this idea instead of others that I had was simply that I couldn't make those other ideas work at all.

The circus has had its share of disasters over the years, from train wrecks to tent fires and more, and many of these are well-documented in photos. But none of those photos have the strong central figure that a card needs, and combining them with other images usually produced a busy, dizzying mess.

Likewise, at the very least I wanted to change the background of the original Chaplin photo to a more identifiable circus disaster. There I ran into problems of perspective and composition that in the end I did not feel were surmountable given the resources I had. And so I had to settle for just adding a new brick wall behind Chaplin, putting the poster of his movie on it, and then tipping in the five buckets -- three of which presumably have been spilled during the fire-fight, and two of which, in full tarot tradition, stand upright signifying the fullness and success of the comedian's over-arcing life that were likely not visible to him at the time.

Chaplin himself is in a slightly different position within the picture, and placed on a separate layer so that I could light and shade him. The whole image has been flipped and then colored and shaded. But I feel as if I should have been able to do more, to make this design better than it is... although in the end, I suppose it's appropriate to be disappointed with the design of a card that's all about disappointment.