Roll on The Chariot! 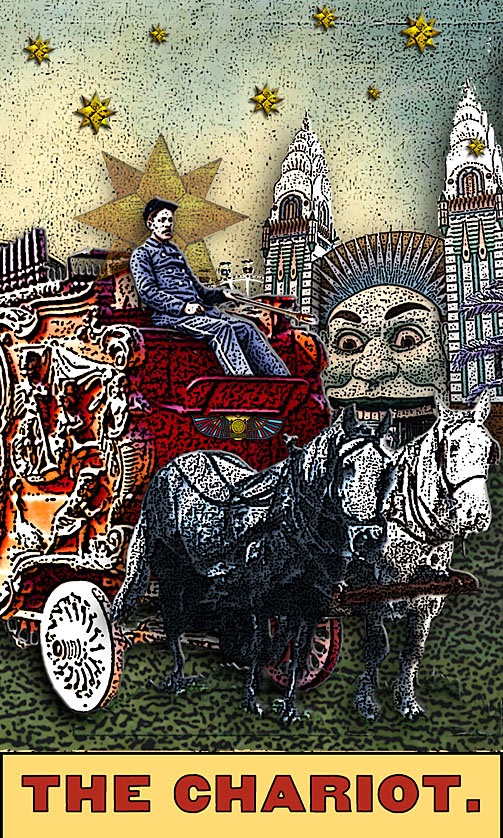 This one went through a couple of versions. The real design problem was simply that Circus wagons are meant to be seen and appreciated from the side, not the front! At one point I said to Carrie Paris (whom I now dub the Official Midwife for this deck). "I wish I could turn this card on its side!"

Then -- once you've crammed in as much of the side as you possibly can, you have to figure out how and where to fit in the creatures who are drawing the chariot! It's a nightmare! Plus, I had discovered a really cute circus wagon that I loved and wanted to fit as much of it into the picture as I could... and in addition to that, I had a vintage photo of a circus family on the back of a horse that I wanted to include as well. The finished design didn't end up doing justice to either element. I'm going to do something different here and show you my first "take" on the card: 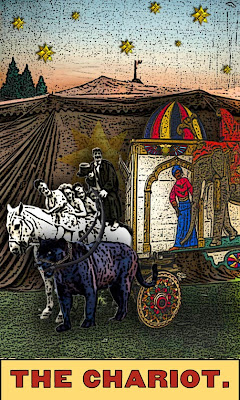 My real problem with this design is that -- despite having a black panther as one of the creatures drawing the wagon -- it just sort of sits there. The Chariot typically represents speed, haste, power, victory and success among other things, and ... really NONE of those things were coming through in the original design (the new version still comes up short in speed and haste, IMHO). Carrie had other points to make. It was clear that the thing needed more work.

I kept the background and will (maybe) use it on one of the remaining Major Arcana cards, and who knows but that the other images will turn up somewhere in the minors, so nothing will go to waste -- but really, aren't you glad I went back to the old drawing board on this one?

The finished card above combines elements from more than six vintage sources, all "artified" and hand-colored. I was very pleased to find a vintage driver who would actually sit on the wagon in something approaching the right perspective, although he's holding his sceptre at kind of a wonky angle!

Honestly, I still would like to find a way to get those horses in motion. On the other hand, Pamela Coleman Smith's original card design for The Chariot isn't all that great on speed, either... the two Sphinxes drawing her Chariot are sitting with their paws folded! And if you go back to very early styles of decks (the many iterations of Marseilles that are out there, the Swiss IJJ and the "Ancient Italian" which is a particular favorite of mine)... honestly, none of their horses are particularly perky. Marseilles decks typically show them standing with one hoof raised to suggest motion (and I might be able to manage that... we'll see), while the Italian shows them in a clearly stationary pose... only the IJJ deck gets them in any kind of real motion, but the IJJ Chariot is just ... weird! -- with its split-screen view of an empty chariot and a man posed in situ in a completely unrelated scene!

I'm getting very, very close to completing the Major Arcana! This is exciting (for ME, anyway)! I'm still trying to iron out production details for the majors-only version of the deck... but I'm working on it!

One thing I'm toying with: the DEVIL card as I have currently designed it works very well with my BOOK and is exactly what I need for my purposes... but perhaps it isn't the best design for a working deck. So I'm thinking that when the complete 78-card deck goes into production that it will have a completely different DEVIL card, and that I'll use the current one only for the first limited run of the Majors deck.

As always, I look forward to hearing your thoughts and input! duckmeister(at)duck soup(dot)me will reach me!

Next up: The Card BACK design!