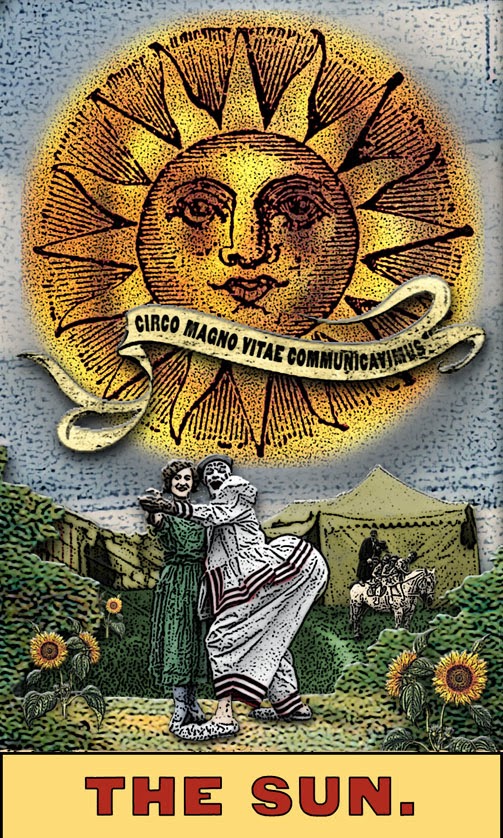 Although this was the LAST card in the Major Arcana that I completed (which perhaps bodes well for the project?), the two remaining cards needed at least some back-braining time and perhaps a tweak or two before they're ready for Prime Time.

This was in many ways the easiest card in the whole Major Arcana to put together, once I stopped being afraid of it. Its message, after all, is simple: bounty, sunshine, joy, happiness and accomplishment. Perhaps the latter more than anything. Although this design contains a nod to traditional tarot imagery in the form of the horse and rider(s) -- an element left over from my original design for The Chariot -- I part company with tradition over this card because I dislike naked children (who would not be appropriate in a circus in any case!).

Marseilles decks show TWO naked children playing with each other in the sun. That was even worse. Not sure if Crowley was the one who turned them into an adult male/female couple, but it was a step in the right direction. In later decks that adopted Crowley's symbol, the couple stopped dancing or flying and just embraced each other, which makes it too much like THE LOVERS and THE TWO OF CUPS, to my mind. I was happy to find an element that restored both the dancing and the joy. It's an image that I love that wouldn't have worked on any other card in the deck.

Actually, my favorite SUN card design is in a deck that I have issues with. Ciro Marcelli is an accomplished digital artist who has produced three full tarot decks and a Lenormand, all of which have been embraced by the tarot community. For me, everything that Marcelli does looks just a little bit too much like the cover of a Romance novel... but once in a while he comes up with a stunner and his SUN card in Legacy of the Divine Tarot is one. It's an image that doesn't derive from any tarot tradition but is entirely of his own making, and it's lovely. Looking at his SUN card is enough to give me second thoughts about my own.

This being my first deck, it's appropriate that I follow certain traditions and symbols as I learn, although re-interpreting them for my theme. But working on this project also makes me want to design a non-traditional deck composed of original symbols. Michael Dowers and Christine Payne-Towler accomplished this with their Tarot of the Holy Light -- one of my favorite decks (I have it in both physical and app form) and to my mind the most significant and unique deck to appear since PCS and Crowley.

The only completely original element in my SUN card, and the part of it that I'm most pleased with, is the slogan I put on the banner unfurling from around the sun, which reads in Latin The Great Circus of Life. That about says it all.

Next Up: THE LAST JUDGEMENT