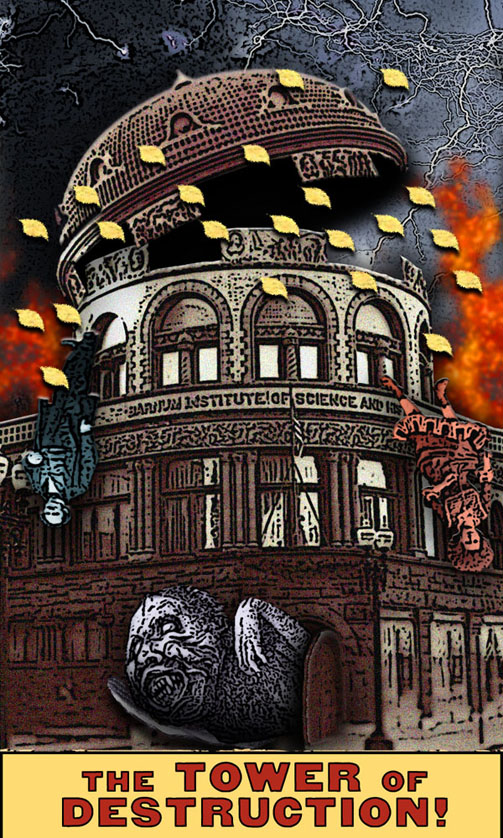 The Tower is a card that represents big, life-changing events, and it falls at a key revelatory moment in the book. The specific event that I adapted to illustrate this most volatile of cards is the destruction by fire of P.T. Barnum's American Museum, although for the purposes of the card design the building shown is a completely different Barnum Museum. That's Phineas Taylor himself on the left, plummeting from the building. The lady on the right is actually one of the performers who exhibited at the original museum.

In my original design for this card, the lower door was closed; and a (much smaller) figure of the infamous hoax exhibit, the so-called "Feejee Mermaid," was seen crawling away at the bottom right of the image. It was Carrie Paris who focused on the Mermaid as a demon and encouraged me to develop the notion along the lines of the Hellmouth that appears on this card in some decks. She even pointed me in the direction of some great information on the web about the Hellmouth theory; you can find those links here and here. Thanks to Carrie, The Feejee Mermaid in all his glorious ugliness is now my official Hellmouth on this card.

(She also corrected me on the matter of the yods: my original design only had thirteen of them. The correct number is 22. Everything is specific in the tarot! Quoth Carrie: "The 22 yods in tarot represent the 22 living yods of the Spirit of the Word, or the 22 letters of the Hebrew alphabet. Those babies are loaded." -- Thanks, C!)

I'm always open to suggestions, ideas, comments, and the like. Let me know what you think.